British photographer Ellie Davies explores the fluid intersection of art and science with her ethereal images of the natural world by Jessica Andrews.

Fantasy and Folklore Collide in These Quixotic Photographs.

Ellie Davies’s celestial photography traverses the boundaries between fantasy and reality with all the ease of a stage actor stepping out from behind the curtain and into the spotlight. Using forests and galaxies as her subjects, the young British photographer applies lighting and craft materials such as wool and paint to manipulate the wilderness around her, highlighting the complexities of our human relationships with the natural world through a haze of dappled light, or an enticing trail of green ferns snaking through the forest.

Her work interrogates the space between human creation and the beauty of nature, accentuating the scope of our alienation from the organic world, and yet simultaneously suggesting that perhaps the human impulse to create is part of nature, too. She is particularly interested in the way that cultural myths and personal experiences can alter our perception of particular spaces, meaning that we read our own stories into our surroundings, rather than seeing them objectively. Thus, by artificially altering the environments she photographs, Davies creates a fusion of magic and reality, prompting us to question our understanding of nature and the layers of meaning that we project onto it.

This summer a new exhibition of her work, entitledInto the Woods, shows photographs she has taken over the course of seven years. From her most recent project Half Light, which attempts to recapture the dreamy quality of her youth spent in the New Forest, to an older series, Stars, which blends images of space taken by the Hubble telescope with those of ancient forests, Davies deftly weaves art and science to compelling effect.

There’s a more cerebral layer to her work too, however: the wilderness has long served as a metaphor for psychological states, and a feeling of silence and solitude permeates her practice. She describes her creative process as a slow, quiet affair, in which she ventures alone into the forest and spends time listening to small sounds and becoming re-acquainted with the stillness of the wild. Safe to say, her gold-flecked branches and misty rivers are the perfect escape from the drudgery of a Monday morning. 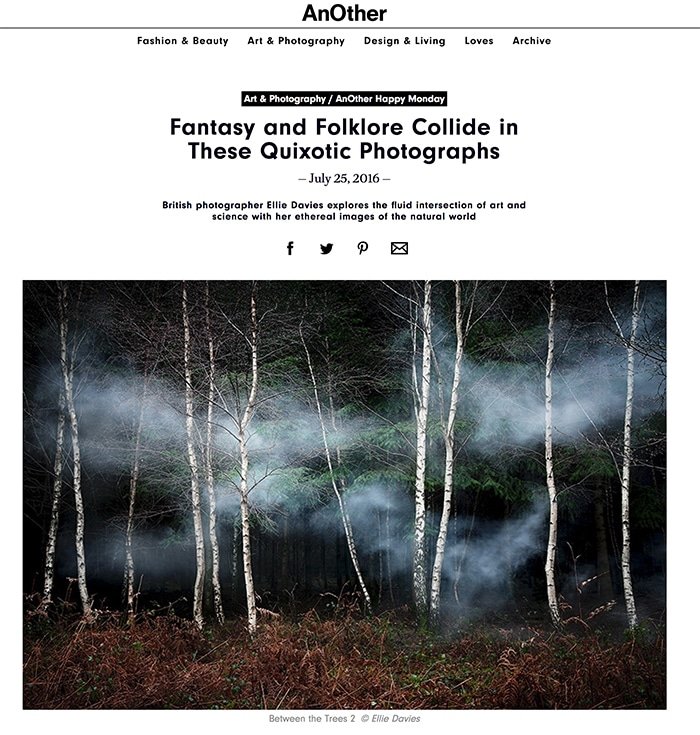