‘Finding the Soul of the Forest’ – Interview with Michael Hodges 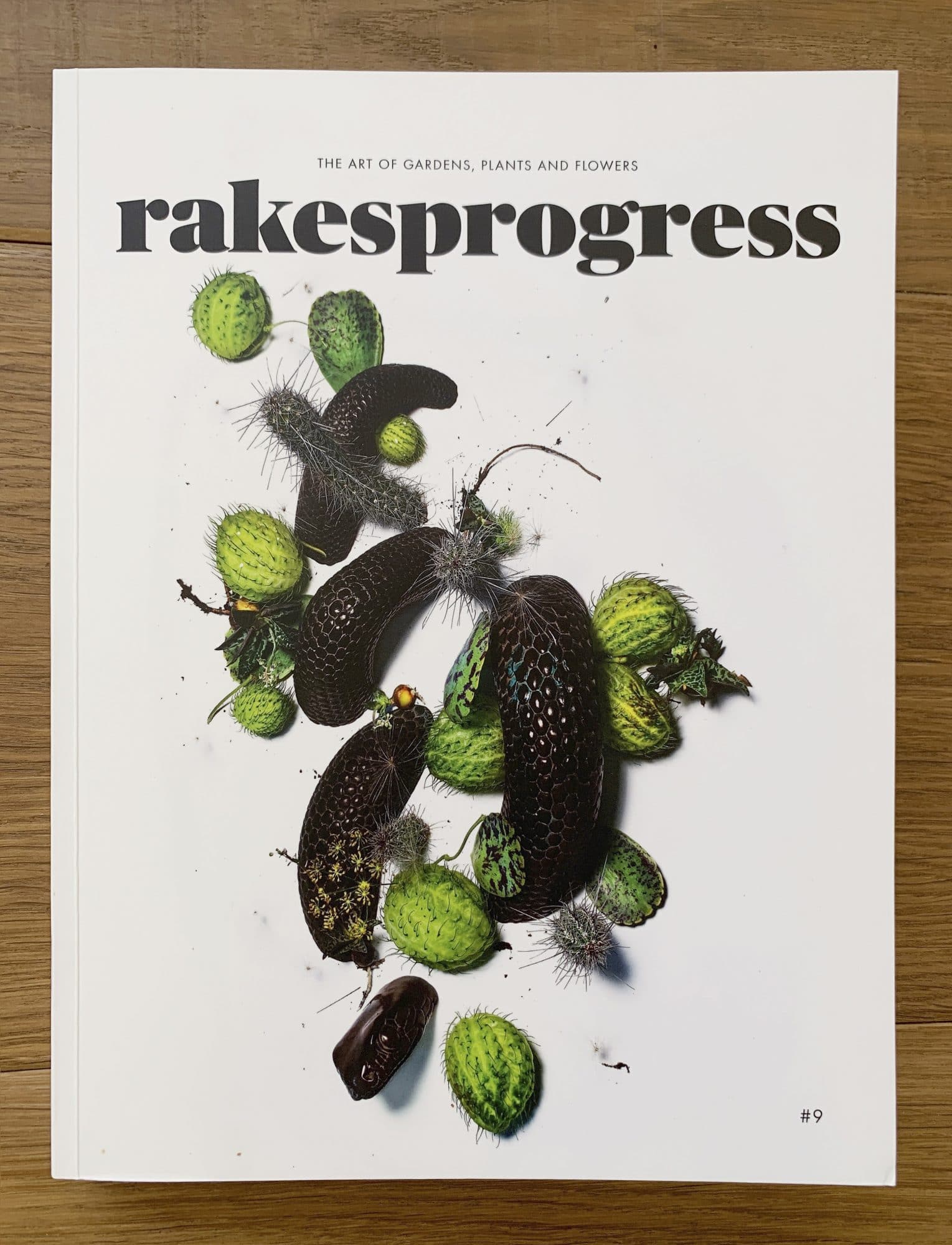 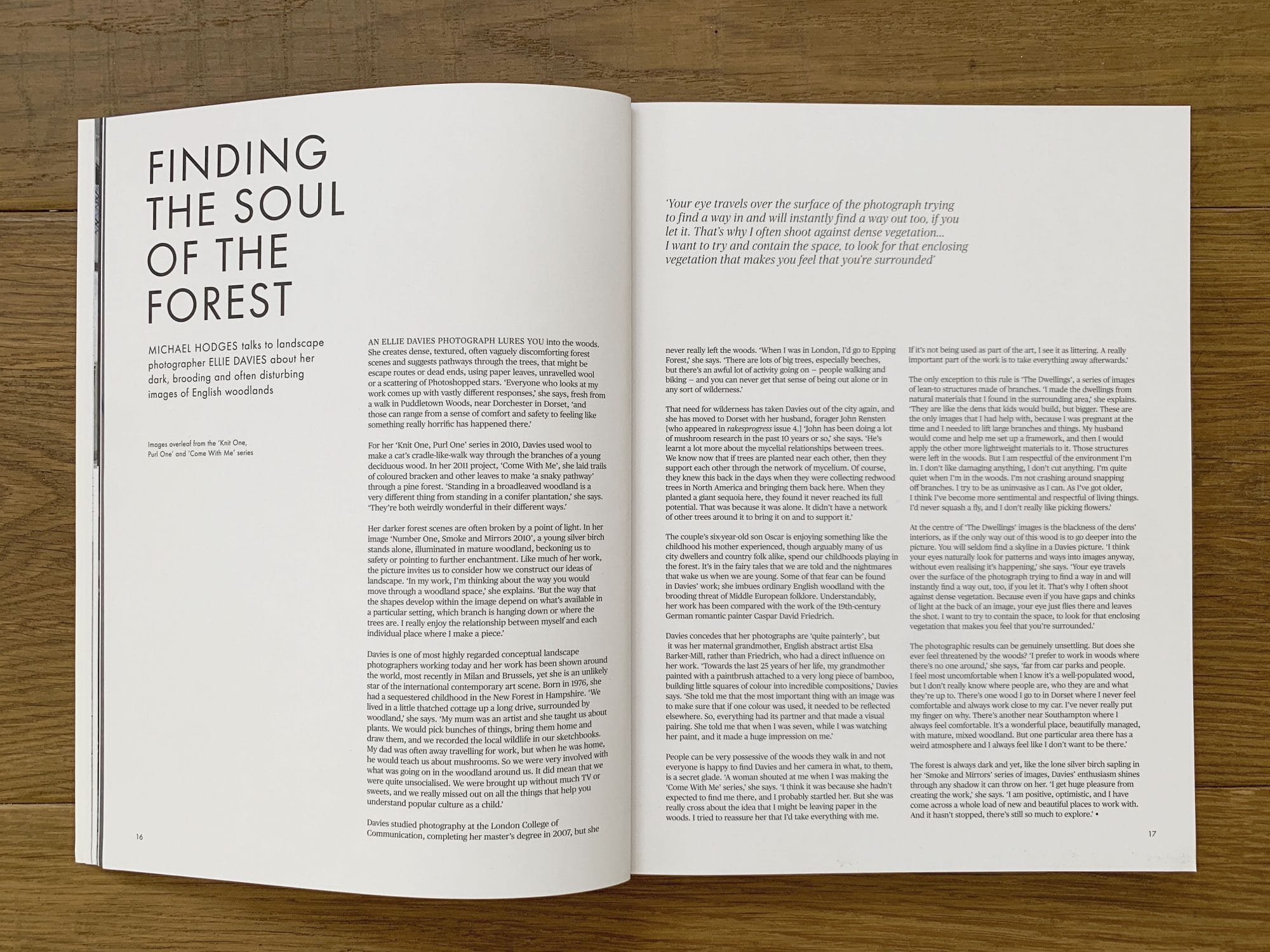 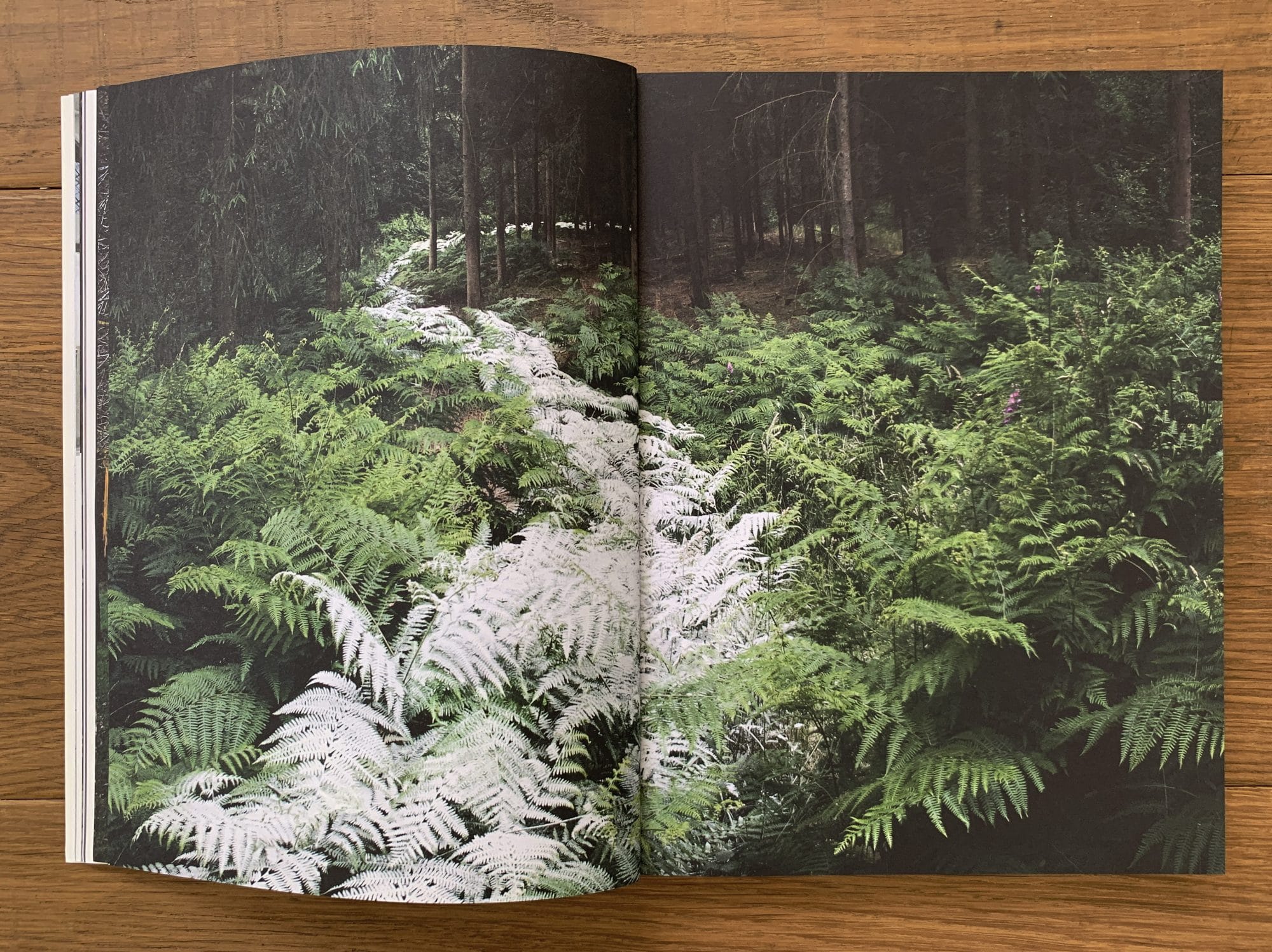 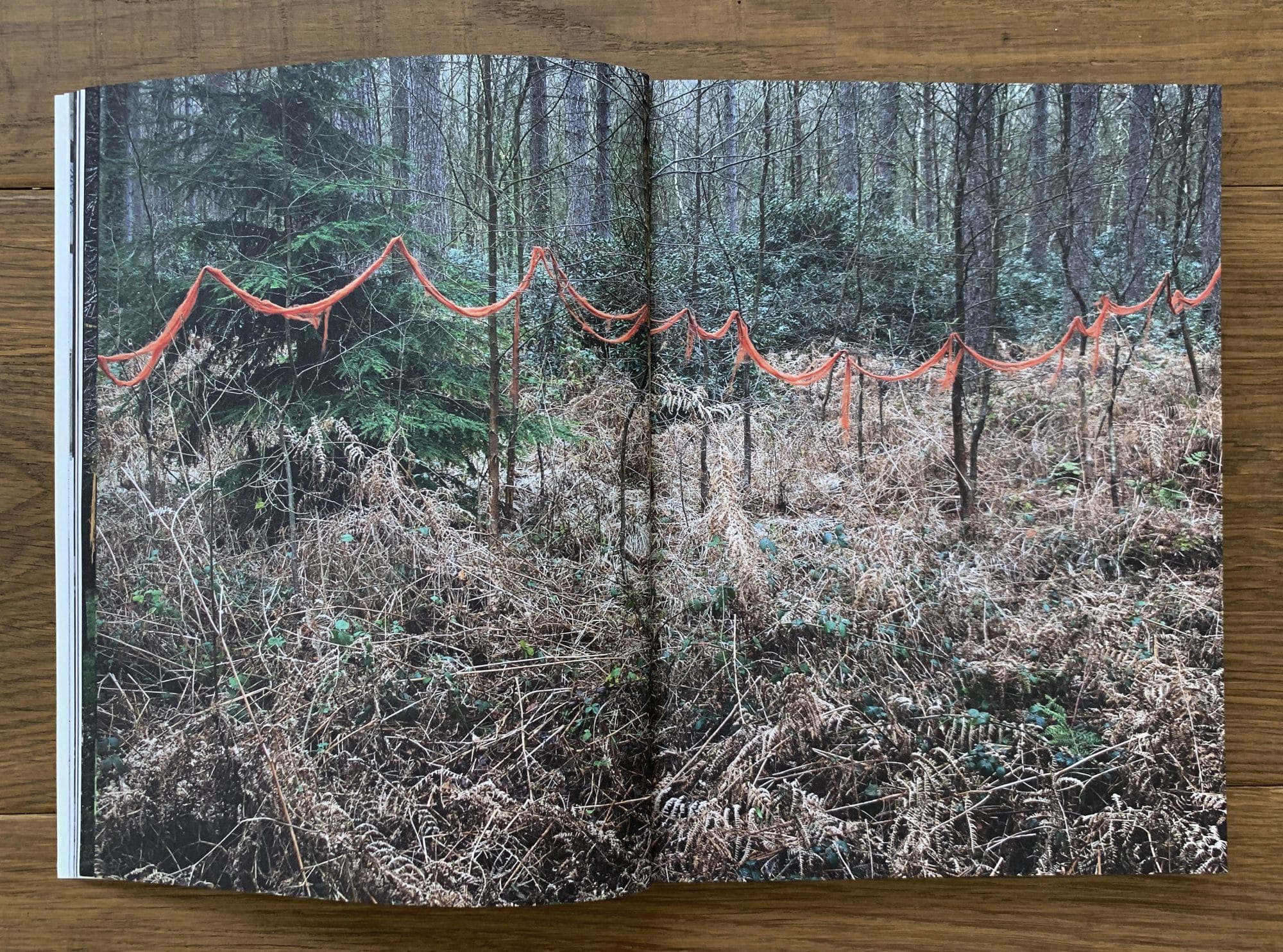 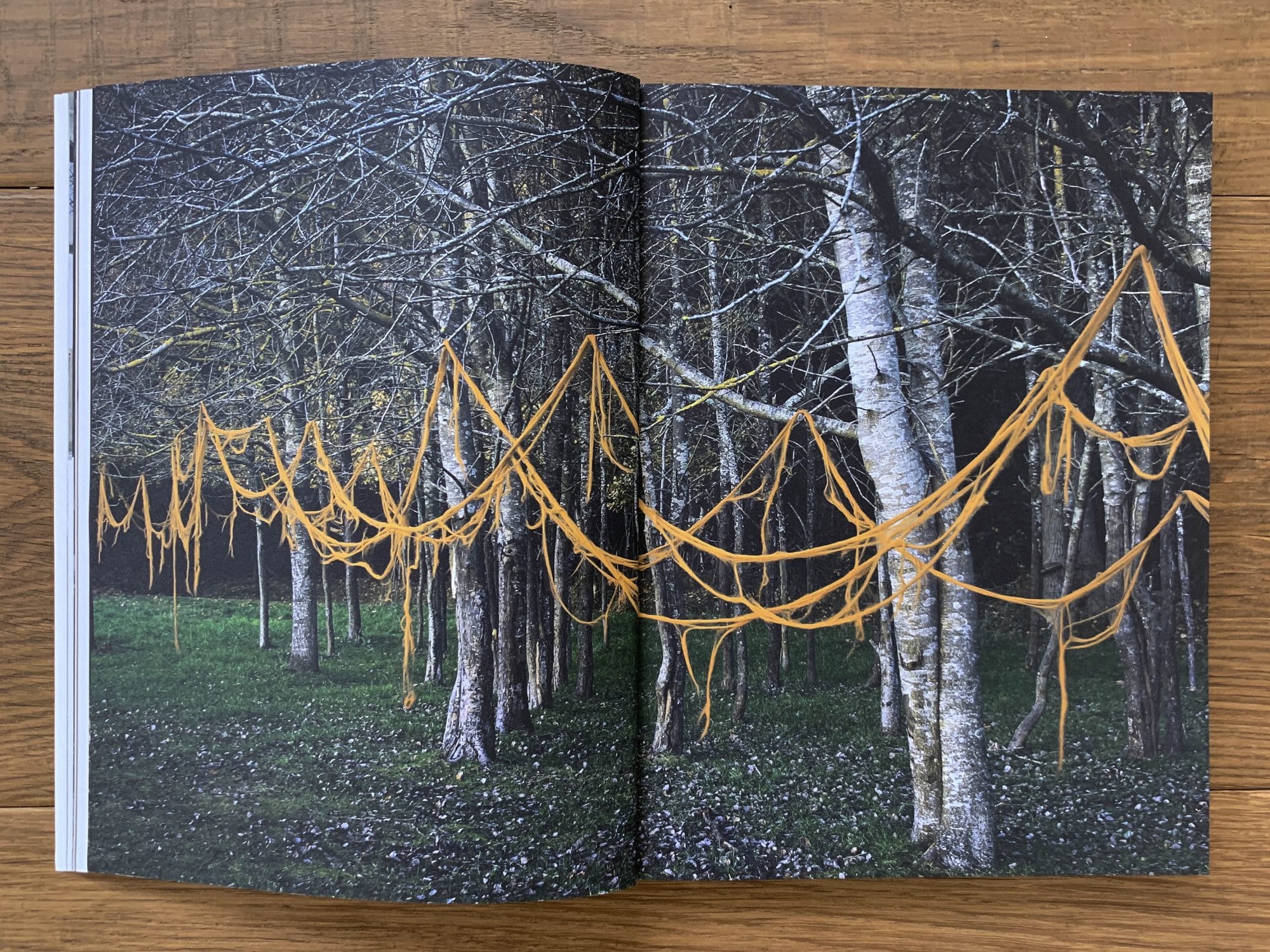 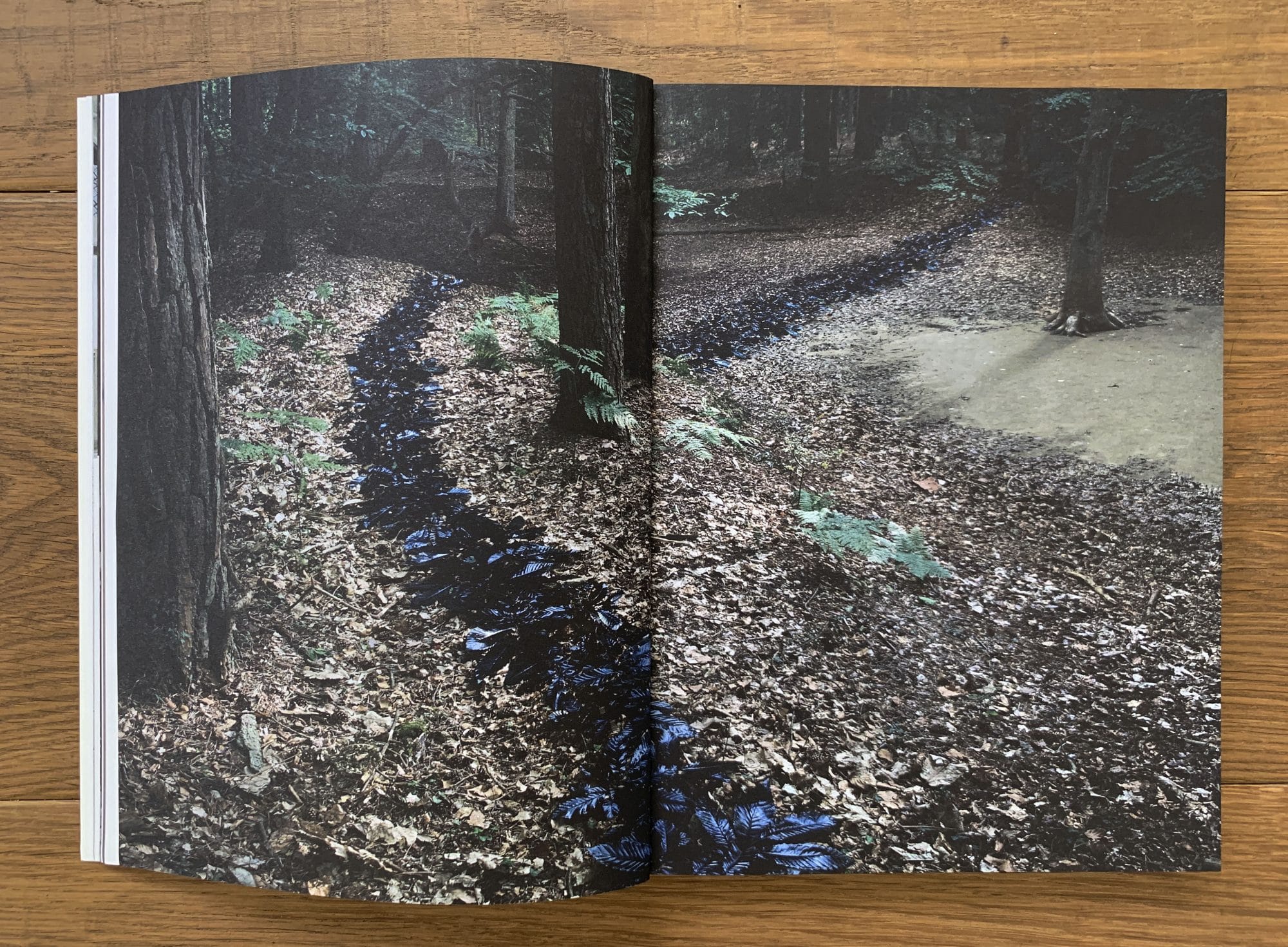 An Ellie Davies photograph lures you into the woods. She creates dense, textured, often vaguely discomforting forest scenes and suggests ways through the trees, cutting up paper in the shape of leaves, unravelled wool or scattering photo-shopped stars to create “interventions” that might be escape routes or dead ends. “Anyone that looks at my work comes up with vastly different responses,” she tells me, fresh from a walk in the Puddletown Woods in Dorset. “It can range from a sense of comfort and safety to feeling like something really horrific has happened there.”

For Knit One, Purl One in 2010, Davies used wool to make a cat’s cradle-come-walk way through the branches of a young deciduous wood. In the 2011 series Come With Me, she laid trails of coloured bracken and other leaves to make “a snaky pathway” through a row of pines. “Standing in a broadleaved woodland is a very different thing from standing in a conifer plantation,” she says. “They’re both weirdly wonderful in their different ways.”

Her darker forest scenes are often broken by a point of light. In Number one, Smoke and Mirrors 2010, a young silver birch stands alone, illuminated in mature woodland, beckoning us to safety or pointing to further enchantment. Like much of her work the picture invites us to consider how we construct our ideas of landscape. “In my work I am thinking about the way you would move through a woodland space,” she says. “But the way that the shapes develop within the image are dependent on what is available in a particular setting, which branch is hanging down or where the trees are. I really enjoy the relationship between myself and each individual place where I make a piece.”

Davies is one of most highly regarded conceptual landscape photographers working today and has been shown across the world, most recently in Milan and Brussels, yet she is an unlikely star of the international contemporary art scene. Born in 1976, she had a sequestered woodland childhood in the New Forest in Hampshire. “We lived in this little thatched cottage up a long drive, surrounded by woodland,” she says. “My mum was an artist and she would teach us about plants. We would pick bunches of things, bring them home and draw them and we recorded wildlife in sketchbooks. My dad was often away travelling for work but when he was home he would teach us about mushrooms, so we were very involved with what was going on in the woodland around us. It did mean that we were quite unsocialised, we were brought up without much TV or sweets, we really missed out on all the things that help you understand popular culture as a child.”

Davies studied photography at the London College of Communication, completing her MA in 2007, but never really left the woods. “When I was in London I’d go to Epping Forest,” she says. “There are lots of big trees, especially beech, but it’s very populated. There is an awful lot of activity going on, people walking and biking, and you can never get that sense of being out alone or in any sort of wilderness.”

That need for wilderness has taken her out of the city again and today Davies has moved to Dorset with her husband the forager John Rensten [See Rakes Progress issue 4.] “John has been doing a lot of mushroom research in the last 10 years or so,” Davies says. “He’s been learning a lot more about the mycelial relationships between trees and found that fascinating. We know now that if trees are planted near each other then they support each other through the network of mycelium. Of course, they knew this back in the days when they were collecting redwood trees in North America and bringing them back here. They would find that they’d plant a giant sequoia here and it would never reach its full potential. That’s because it was alone. It didn’t have this network of other trees around it to bring it on and to support it.”

The couple live with their six-year-old son Oscar, who is enjoying something like the childhood his mother experienced though arguably all of us, city and country dweller alike, spend our childhoods in the forest. It’s in the fairytales we are told and the nightmares that wake us when we are young. Some of that fear can be found in Davies’s work; she imbues ordinary English woodland with the brooding threat of European folklore and, understandably, her work has been compared with the work of the 19th century German romantic painter Caspar David Friedrich.

Davies concedes that her photographs are “quite painterly” but it was her maternal grandmother, the English abstract artist Elsa Barker-Mill, rather than Friedrich, who had the direct influence. “Towards the last 25 years of her life she painted with a paintbrush attached to a very long piece of bamboo,” Davies says. “She would build little square shapes of colour into these incredible compositions. She would always say to me the most important thing with an image was to make sure that if there was one colour used within the image, it needed to be reflected elsewhere. So, everything had its partner and that made a visual pairing. She told me that when I was seven, while I was watching her paint, and it made a huge impression on me.”

People can be very possessive of the woods they walk in and not everyone is happy to find Davies and her camera in what, to them, is a secret glade. “I had a horrible woman shout at me when I was making the Come with Me series,” says Davies. “I think it was because she hadn’t expected to find me there and I probably startled her. But she was really cross about the idea that I might be leaving paper in the woodlands. I tried to reassure her that I’d take everything with me. If it’s not being used as part of the art, I see it as littering. It’s a really important part of the work is to take everything away afterwards.”

The only exception to this rule is The Dwelling, a series of photographs of leans-to structures made of branches. “I made them all from natural materials I found in the surrounding area,” she says. “They are like dens that kids would build, but bigger. Actually, these are the only images that I had help with, because I was pregnant at the time and I needed to lift large branches and things. My husband would come and help me set up a framework, and then I would apply all the other material to it that was more lightweight. Those would get left in the woods. But I am respectful to the environment I’m in, I do not like damaging anything, I don’t cut anything. I’m quite quiet when I’m in the woods. I’m not crashing around snapping branches. I try to be as un-invasive as I can. As I’ve got older, I think I’ve become more sentimental and more careful and more respectful of living things. I would never squash a fly, I don’t really like picking flowers.”

At the centre of The Dwelling is the black darkness of the den’s interior, as if the only way out of this wood is to go deeper into the picture. You will seldom find a skyline in a Davies picture. “I think your eyes naturally look for patterns and ways into images anyway, without even realising it’s happening,” she says. “Your eye travels over the surface of the photograph trying to find a way in and will instantly find a way out too, if you let it. Which is why I often shoot against vegetation that’s very dense. Because even if you have gaps and chinks at the back of an image, your eye just flies there and leaves the shot. I want to try and contain the space, to look for that enclosing vegetation that makes you feel that you’re surrounded.”

The results can be genuinely unsettling, I wonder if she ever feels threatened herself? “I prefer to work in woods where there’s no-one around at all,” she says. “Far away from car parks, and people, and dog walkers. I actually feel most uncomfortable when I know it’s a well populated wood, but I don’t really know where people are or who they are and what they’re up to. There’s one particular wood I go to in Dorset, I just never feel comfortable there and I always work quite close to my car. I have never really put my finger on why it. There’s another wood near Southampton which I love and I always feel very comfortable there. It’s a wonderful place; really beautifully managed, with mature, mixed woodland. But there’s one particular bit of it that has a really weird atmosphere and I always feel like I don’t want to be there.”

The forest is always dark and yet, like the lone silver birch sapling in Smoke and Mirrors, Davies’s enthusiasm shines through any shadow it can throw on her. “I feel huge pleasure   making the work,” she says. “I am a positive, optimistic person and I have come across a whole load of new and beautiful places to work with. And it hasn’t stopped, there’s still so much to explore.”