Photographer Ellie Davies, who has been living in Dorset for the last five years, has forest as a recurring motif in her photography to retrace the coexistence of human life and nature.

The Dorset (South West England)-based photographer Ellie Davies’ statement, “The forest becomes a studio, forming a backdrop to contextualize the work…” could unflinchingly trigger an immediate interest towards her work that has forest as a recurring motif. The alluring world of forest in her works acts as a point of intervention between the natural world and the human mind. Having worked in the woodlands for close to a decade now, Davies is keen to let the viewers have a moment of pause to reassess their understanding of nature. At the sprawling field of greens, to realise this, she often superimposes the sculptural elements such as – a wire of lights spreads on the ground or a strand of wool laces between trees. 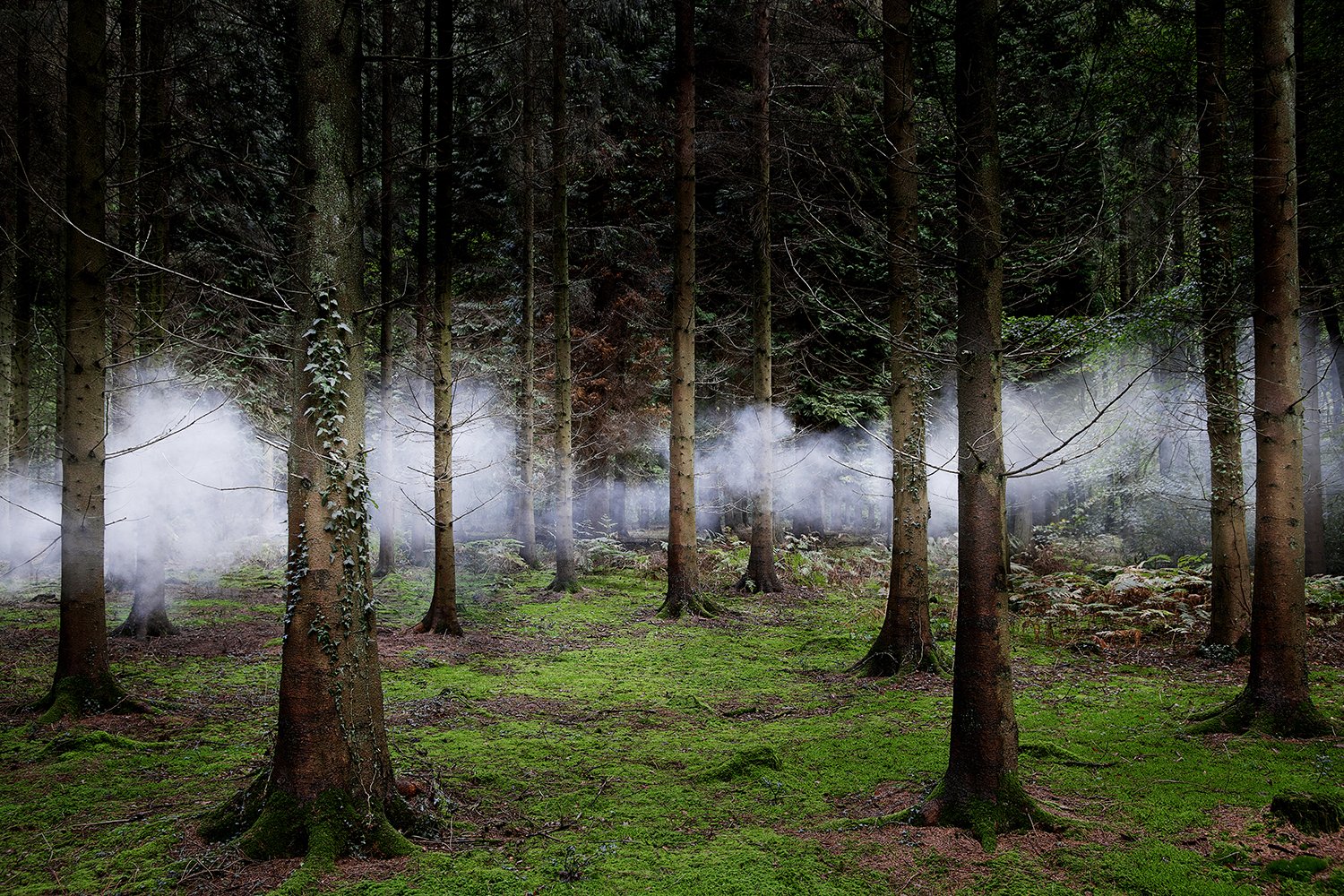 Davies, in an interview with STIR, says: “The exploration of our human relationship with forest landscapes has always been a central theme of my photographic practice. I have considered our contemporary and collective sense of alienation from the natural world, the theoretical perceptions of beauty and the sublime, and the commodification of landscape as a leisure facility and resource”. The forest, harbouring the periphery of the tamed world, serves as a repository of dualities – good and evil, prosperity and dangers, order and chaos, among others. The binaries find creative manifestation in the rich repertoire of folklore and myths. As Davies explains, her work is a direct reflection of “our personal experiences and interactions with the landscape: shaped by the wider cultural perceptions of forests, which come to us through the coloured prisms of storytelling and mythology, literature, fine art and the more contemporary narratives of climate change”. 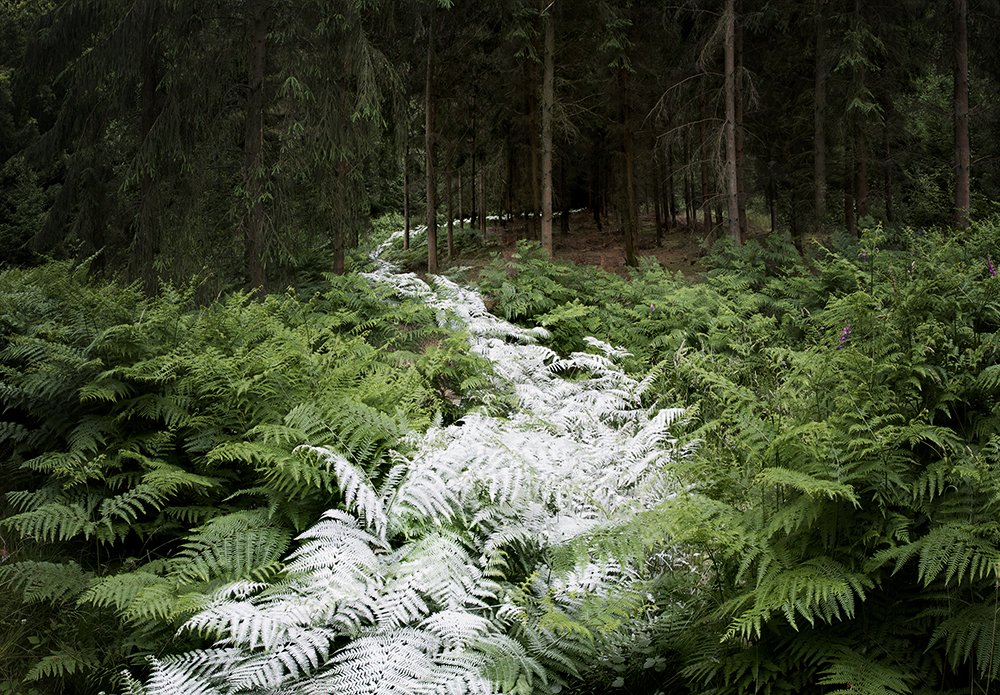 Gauging the asymmetries seeping in the ecosystem, Davies’ most recent series Seascapes is a meditation on climate change; rising sea levels and frequent extreme weather events have led to more serious flooding worldwide. Tracing the climatic upheaval, Davies says, “In the winter of 2019-2020, the New Forest in the South of England, where I grew up and made most of my work, experienced a succession of storms, which generated extensive winter-long flooding. These images are imagined scenes about a potential future where flooding becomes a permanent mark on the landscape and water flows over the woodlands”.

Finding a forest as a place that, at its disposal, is ready to offer a varied sense of inspiration with changing seasons and time of the day has a profound effect on Davies. Before composing a setting of her works, Davies declares, “As I first enter the forest, I try to settle into the surroundings, listening to the chirping of birds. There is always a heightened level of awareness that makes me feel alive and energetic, excited to begin my work”.

Given the natural setting of a forest, the extent of challenges and tribulations is also heightened. Taking the difficulties in her stride, Davies states, “I prefer a very lightweight kit because my practice involves lots of walking. I use a Pentax 654Z with two lenses and a tripod. I also carry an umbrella that clamps to the tripod so I can work in the rain. I love to work in dark, overcast or wet weather so I have to be prepared and I have recently started using a bike because it enables me to travel further. I like to work away from forest trails and other people, I love the solitude and I try to bring a sense of that into the work. There’s always a tension between pleasure and fear that comes with being alone in the woods and I try to capture that”. 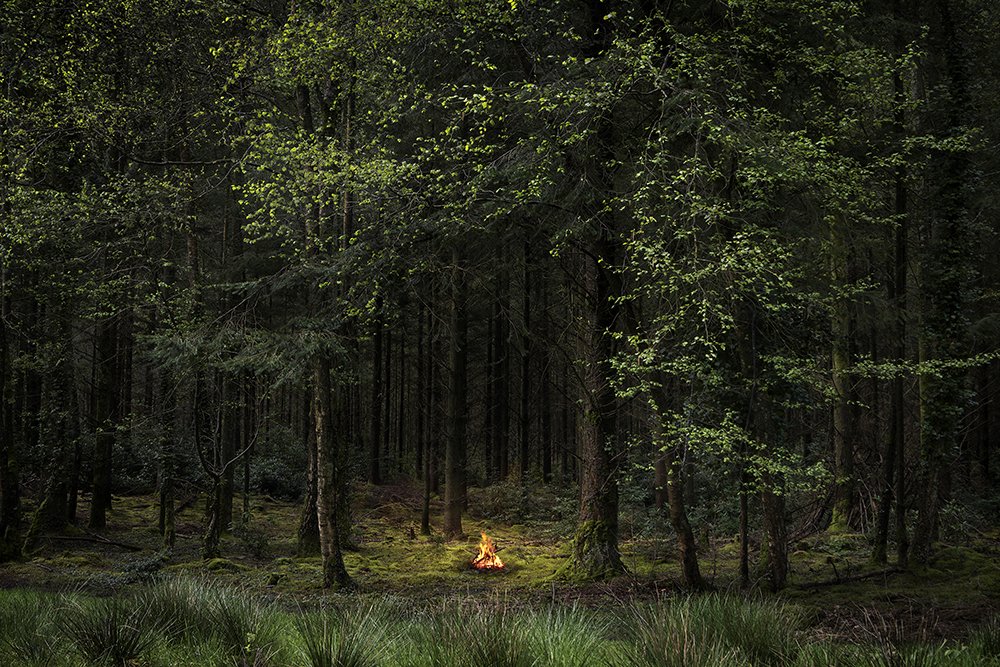 As someone who was trained to produce analogous prints in the darkroom, the familiarity with accidental occurrences and unintended coincidences is not completely unknown. Perceiving it as a catalyst to lead to something new, Davies says, “The most interesting parts of any day out shooting are the accidental things that happen. It is very exciting when something suddenly starts to work, you just feel it sparkling through the viewfinder. As the series develops and progresses, I become surer of where it is going and what I am trying to do so less planning is needed each time I go out. Once the (sometimes painful) process of editing is done I use minimal retouching. The exceptions to this are my Stars and Seascapes series, in which I wove images from the Hubble Telescope and the sparkling surface of the sea into the forest scenes. The final prints are C-type light jet prints so although I shoot digital files they are projected through an analogue colour enlarger and printed on C-type paper. I really like this step back into the analogue process, away from a purely digital workflow; I think it suits my work and it creates beautiful prints”. 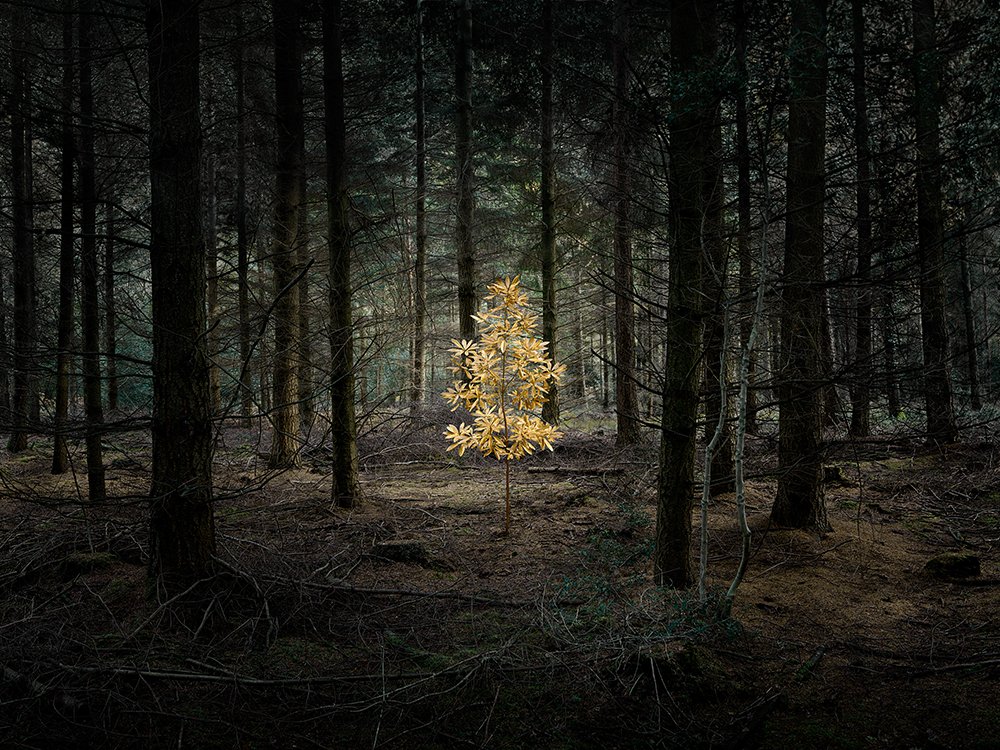 Like the golden tree installed against the backdrop of a dense forest in the image Smoke and Mirror, Davies’ photographs stand out to weave a narrative that opens a slew of interpretation for the viewers. “I hope the viewer can experience the atmosphere of the woodlands I photograph and wrap their own narrative around it. I love how people respond to my work, some finding it beautiful and uplifting, others deeply disturbing. Maybe in the process, they will discover something about themselves too”.

A recluse into the meadows has been celebrated across the centuries as a successful creative collaboration between mind and nature. Davies’ work reaffirms the availability and achievability of such possibilities.