Town & Country’s very own photography director Rachel Louise Brown is among the artists on show as part of Crane Kalman’s virtual exhibition at Photo London Digital this month. The Brighton-based gallery is one of 100 exhibitors from 21 countries to participate in the international photography fair, which has moved entirely online for the first time this year.

Featured within an inspiring display of work by award-winning female photographers, Brown’s series Simulations was produced during a four-year artist residency at the Palm Beach Photographic Centre in South Florida. Through documenting famous public attractions, such as the Palm Beach Zoo and the Fright Nights at South Florida Fairground, Brown explores what is real and what is illusory in these sights, and highlights the cracks in the surface of the American Dream. Playground rides, beauty parlours and ice-cream stands are empty, captured against a dark, foggy backdrop reminiscent of stills from a horror film.

RACHEL LOUISE BROWN
Featured alongside Brown’s work is the London-based fine-art photographer Ellie Davies’ new series Seascapes, which explores nature at its most destructive. Her dark and eerie landscapes are ravaged by extreme weather events, such as last year’s widespread flooding in the New Forest, a setting from which she frequently takes inspiration. In these images, twisted tree branches are reflected within glinting pools of inky water to create an otherworldly atmosphere. 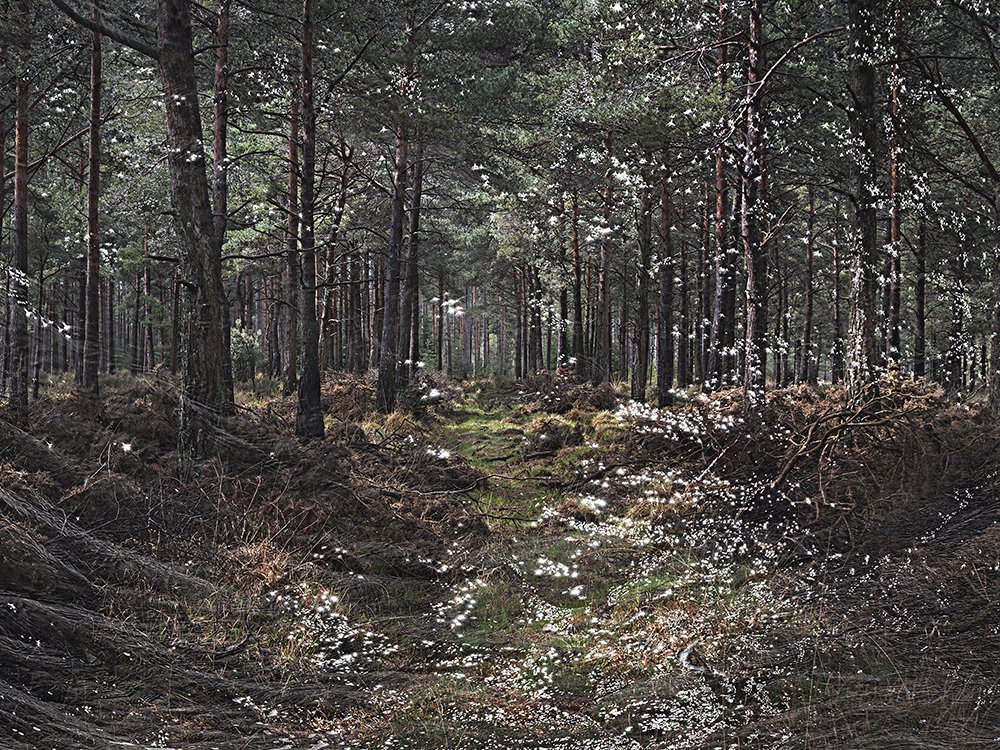 ELLIE DAVIES
Completing the trio of female photographers is Karine Laval, whose imagery is influenced by the French philosopher Michel Foucault’s concept of heterotopia – a term that describes places of the world that are ‘neither here nor there’. A kaleidoscopic riot of colour, Laval’s photographs use two-way mirrors and Mylar sheeting (a highly reflective material) to transform recognisable parts of nature into abstract forms. Her Quarantine series, created at the beginning of the pandemic from her home in Brooklyn, evoke the “slow-motion theatre of nature” unfolding in her garden. Blooming flowers including tulips and roses, in bright shocking pink and deep azure blue, are layered over the garden’s lush green ferns and dark undergrowth, to dazzling effect.